Taking Poetry Beyond Haiku and Acrostics in APRIL!

April 04, 2012
It is April and that means National Poetry Month in the ! I vividly recall during my six years living and working in the how schools went into poetry mode each April. I found this focus on poetry left me in a quandary. I love poetry, so this national focus on poetry was something that greatly impressed me. It brought this ancient genre to centre stage and I considered that was something our Australian schools could learn from. Poetry in such a supportive environment began to shed its elitist cloak. It became accessible to the broader school population.

However, something began to gnaw away at me as each successive April celebration unfolded. I became concerned that in the minds of many educators poetry was being constrained to a single month in the school calendar.

I wanted to encounter poetry across the school year, but it seemed tightly confined to the month of April in the minds of many. I wanted poetry to pop up unexpectedly; at various times of the school day, and in different subject areas. I waited patiently, but it only appeared sporadically. It had a mercurial air to it. I started advocating for poetry, suggesting it to the teachers with whom I worked. I found myself desparate to plant poetry possibilities.

Additionally, April poetry encounters often followed a very familiar refrain for many teachers. Successive groups of students were fed a steady diet of haiku and acrostic poems and little else. When one considers how diverse poetry is as a writing form, it seemed that teachers were sitting firmly in the comfort zone. Probationary poets however often find haiku quite challenging as an initial writing experience. Its defined structure requires a degree of orchestration and language mastery on the part of the writer, that many find daunting. Limericks fall into the same category.

Acrostic poems are fine if your name is Veronica or Mitchell, but you don’t have much to play with if you happen to Li, Ty or Hu!

When young writers are having their early encounters with poetry, it’s important that the experience be positive. As teachers we need to set them up to be successful, That way they are more likely to return for more- to persist! Initially they need to see and hear lots of poetry. Immersion before writing means we avoid cold starts!

Innovating on text patterns is often a good place to begin. Following patterns that provide the inexperienced poet with scaffolding for their initial efforts with verse is similar to the way training wheels support the inexperienced bicycle rider.

I often use Margaret Wise Brown’s, The Important Book with its distinctive pattern as a launching pad. This wonderful classic has worked for me every time.

Shanet, a Grade four poet innovated further on the pattern in her reponse:

Some additional ideas to consider to get things started might include:

*Select a short poem and remove certain words (those in italics) and have students attempt to reconstitute the poem using words of their own choosing. There is no one correct answer here. The idea is to make them aware of word choice.

*In the following example, students are given a number of choices and this enhances control and ownership over the resultant poem. They choose the order of the statements and number of statements they wish to use to construct their poem. They may also add some of their own. They may choose to change the setting…

*I like to use list poems as they have an extremely high success rate with beginning writers. List poems are represented in many cultures and are an old form of poetry. Douglas Florian uses this form in a lot of his poetry. I usually begin by sharing one of my list poems and ask the students to tell me what they notice about the structure. They tend to notice the variety of line length, the use of white space at the end and the surprise ending. I challenge them to incorporate these language elements into their own writing.

SCAREDY CAT MEMORIES
I used to be afraid of the dentist’s drill,
Creaky floorboards
And snakes at the end of my bed
Electricity
Knives and guns
Haircuts
Monsters lurking in the shadows
And dogs in the night
Nightmares
People with missing teeth
And big kids who harass you for being- little
Bee stings
Getting lost
Sharks
And drowning in quicksand
Baldness
My Nana’s toilet
And roosters

But now I’m afraid of ignorance.

*I usually reserve rhyming verse until the end of any intense work on poetry. Let’s face it, it’s fun, but most young poet’s find it difficult to control the beast. We often end up reading inane pieces of verse where a word is tacked on the end of a line purely because it rhymes rather than fits focus of the poem. I call it the Moon,June and spoon syndrome!

For this reason, I start quite small with rhyming verse, by introducing rhyming couplets as a cloze exercise and work from there. I am guided by the gradual release of responsibility model. As the writer gains confidence working through such exercises, I might only provide the first line and ask them to complete a second line. Lots of guided practice is needed. Interactive and shared writing are also useful instructional strategies to employ at this point. Finally, I get them to create their very own rhyming couplet

I Met A Man

He talked to me of many things
Apples, apes and angel’s ………

His words were like a sweet refrain
And now they’re deep inside my …….

So, there you have it. A smattering of alternatives. I have barely skimmed the surface of what’s possible with poetry. I guess my message is poetry presents a plethora of possibilities… 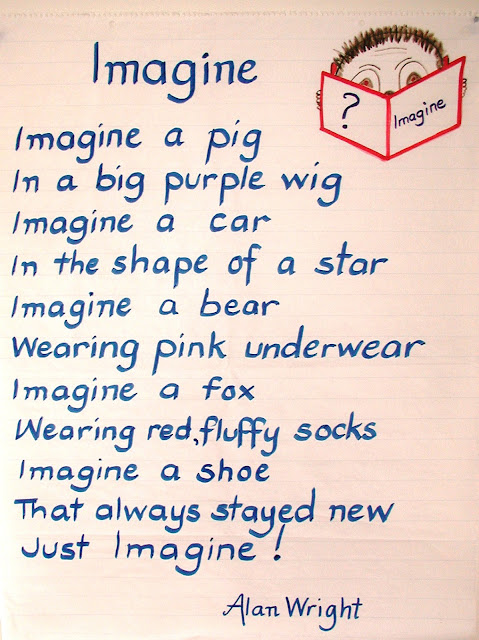